David Parr’s home is a testament to the skills he learnt at the Cambridge firm of F R Leach & Sons who worked with many of the top designers and architects of the day.

David Parr’s intricately patterned house is a brilliant portal into the Arts & Crafts era as well as the world of a working man of that time. But that’s not all. The home was preserved by David Parr’s granddaughter, Elsie Palmer, who lived there for over 85 years. As visitors make their way around the house and discover David Parr’s amazing interiors, they also discover echoes of an already lost 20th century world, mementoes of Elsie’s daily life which always prompt memories and conversation. Find out more below.

In 1886, 186 Gwydir Street was bought by David Parr, a working-class Victorian decorative artist who worked for the Cambridge firm of artworkmen, F R Leach & Sons. David Parr learnt his many skills there, painting houses and churches with designs created by some of the best architects and designers in the country, including George Frederick Bodley, William Morris and Charles Eamer Kempe.

Over 40 years, David Parr decorated his own terraced home in the style of the grand interiors he worked on every day. His house became a pattern book of the work of late 19th century masters, including William Morris, perfectly crafted and painted with care. In 1912, David Parr inscribed ‘If you do anything, do it well’ in his house, and his patterned, hand-painted walls are a testament to that maxim and to the values of the Arts & Crafts movement in general.

The Arts & Crafts movement was a reaction to industrialisation, to big business and mechanisation. The decorative arts and craftsmanship were ways of reconnecting people to the places they lived and worked. David Parr’s home can also be considered an expression of the wider neo-Gothic movement which valued the highly decorative and the domestic but which is usually found in churches and large houses around the country. What is unique is to find David Parr’s skill and artistry hidden in such a humble location, one that expresses so perfectly the ethos of the movement that he was working within – it’s a real find. What is also impressive is that, thanks to David Parr’s family, this work survived intact for so many decades and was not lost to us when he died.

Read more about the discovery of the David Parr House on our About page.

Take a peek into a hidden life

After David Parr’s death in 1927, his granddaughter Elsie Palmer came to live in the house to look after her grandmother and she stayed for the next 85 years. During her time in the house, Elsie married Alfred and they had two daughters, their family life taking place within the extraordinary legacy her grandfather left behind.

Elsie’s is a vibrant presence inside the house that she looked after for so many years and many of her objects spark unexpected memories in visitors as they pass through the house. Her artefacts are lightly imposed on the fabric of the house; a coat still hangs in the hallway, the mangle still stands in the kitchen and her wedding photo is framed on the wall – it is as if Elsie has just walked out of the front door.

As part of Life and Art in a Worker’s House (2017-19), we recruited and trained eight volunteers to make and edit audio recordings of people who have memories of Elsie and Alfred Palmer and/or of life in and around Gwydir Street during and since the Second World War. We also edited earlier recordings of Elsie Palmer herself.

From the age of 12 in 1927, Elsie Mansfield lived at 186 Gwydir Street with her widowed grandmother Mary Jane Parr. As a child she went to Brunswick school in Paradise Street and later she worked at Laurie & McConnal’s department store on Fitzroy Street and then at the pathology labs at Old Addenbrooke’s hospital. She married Alfred Palmer in 1945. Alfred worked as a guard at Cambridge railway station and was a churchwarden at St Barnabas church. They raised two daughters at the house, Ann and Rosemary, who still live near Cambridge. Elsie Palmer was a familiar figure to many in Mill Road, even in to her 90s, as she walked most days to the shops or to church and liked to sit outside Ditchburn Place or at the bus stop nearby.

You can listen to clips from these recordings by clicking on the images below.

We would like to thank all the members of the Palmer and Norman families who have been  actively involved in and supportive of our conservation of the house and our sharing of its stories. We would also like to thank them and everyone else who has agreed to have their memories recorded for the David Parr House. If you remember Elsie or Alfred Palmer or have memories of living or working in or near Gwydir Street and would be willing to share them with us, please get in touch by emailing info@davidparrhouse.org. 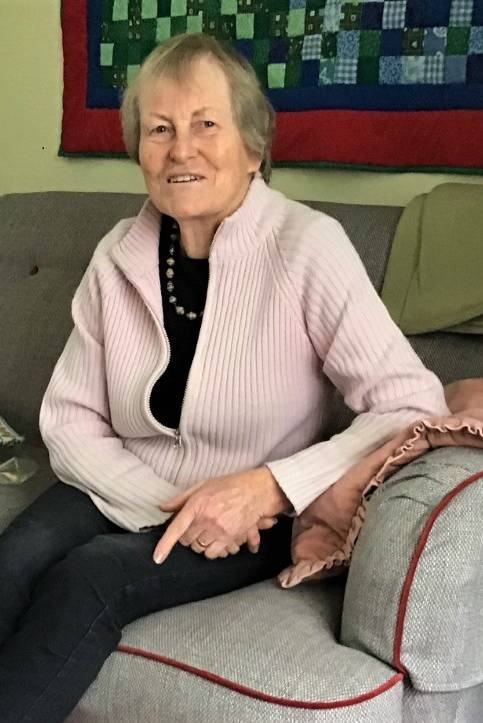 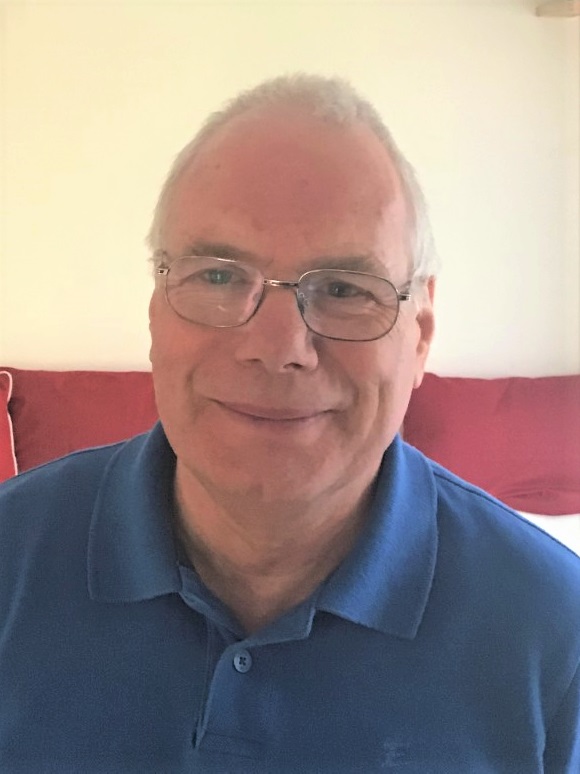 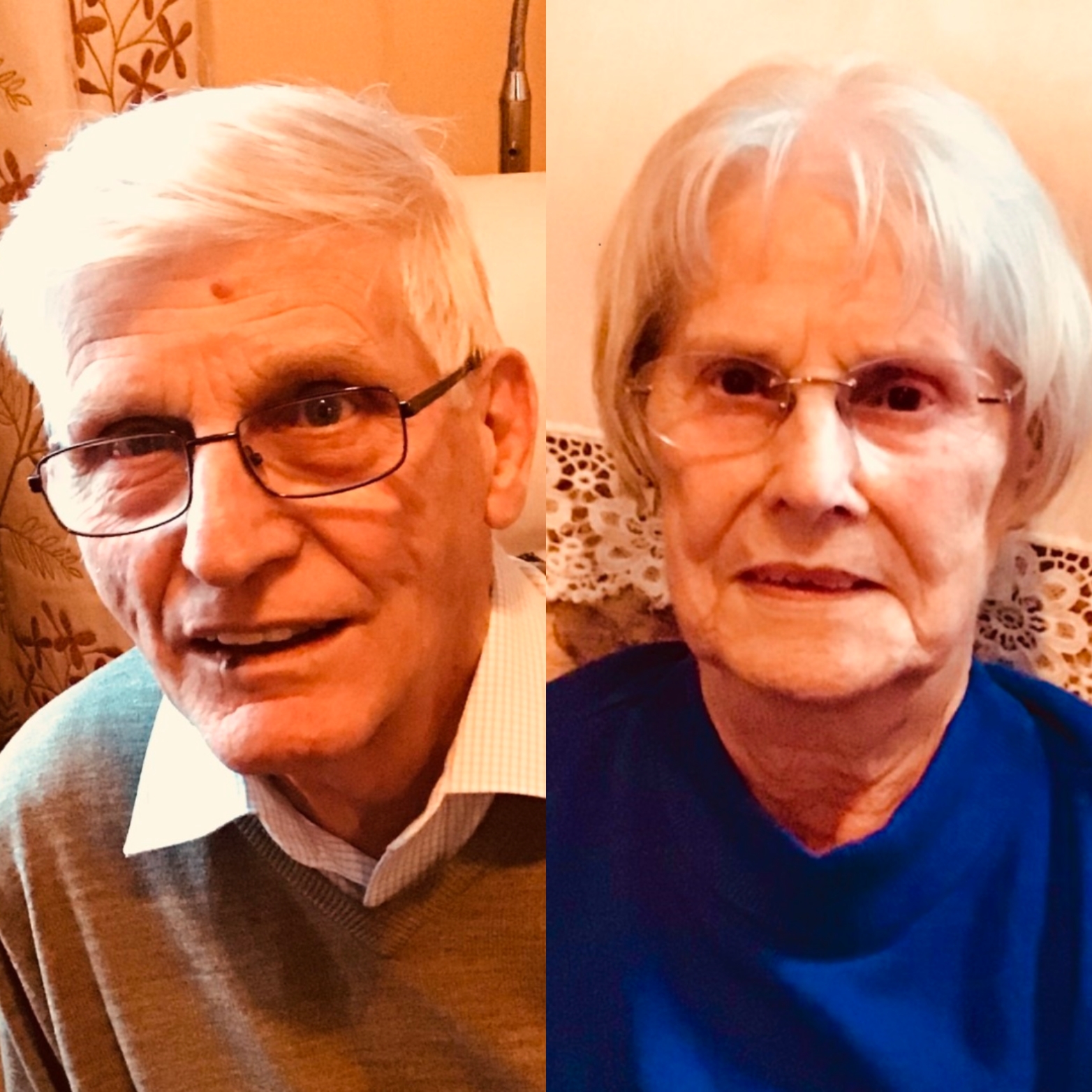 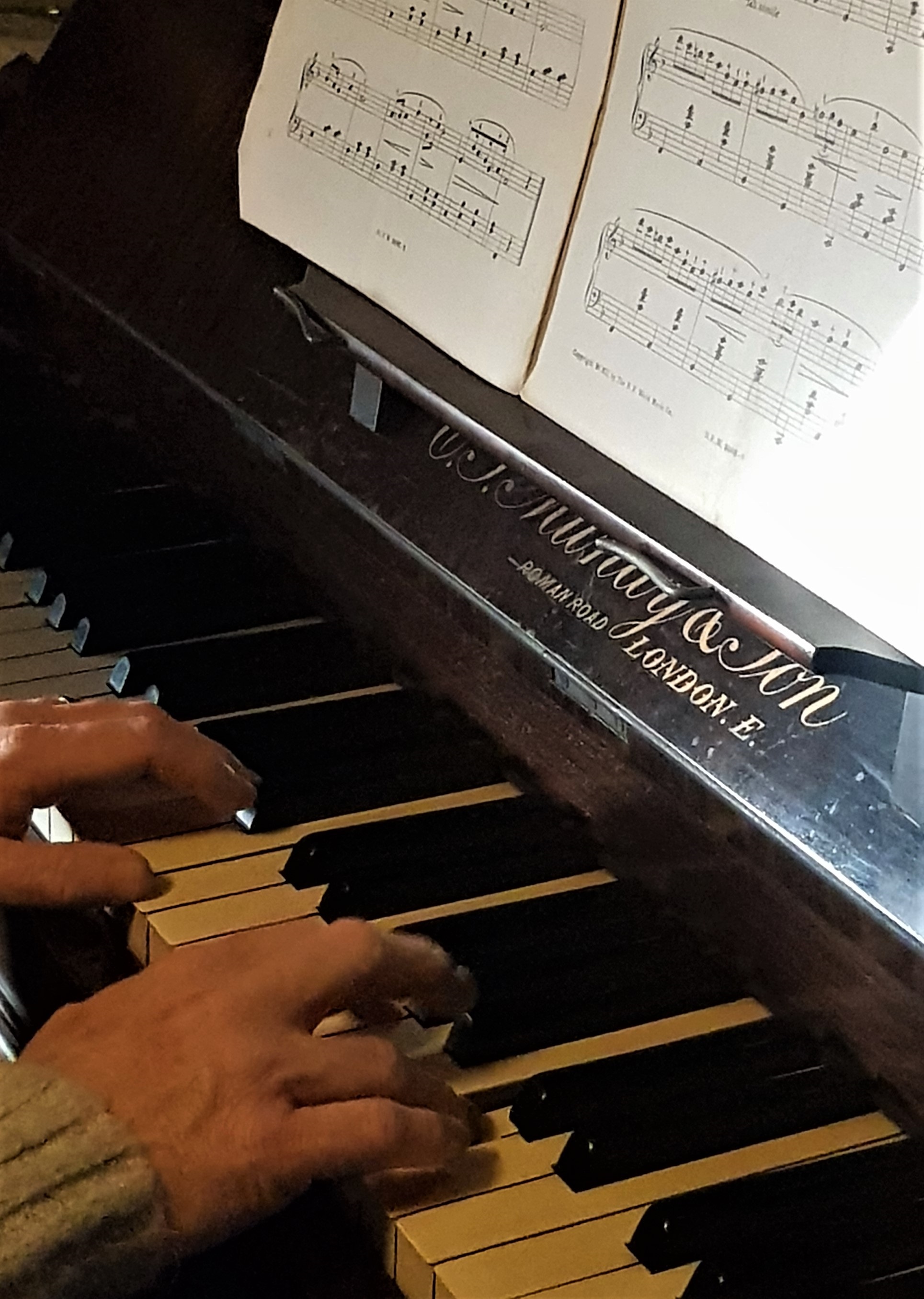 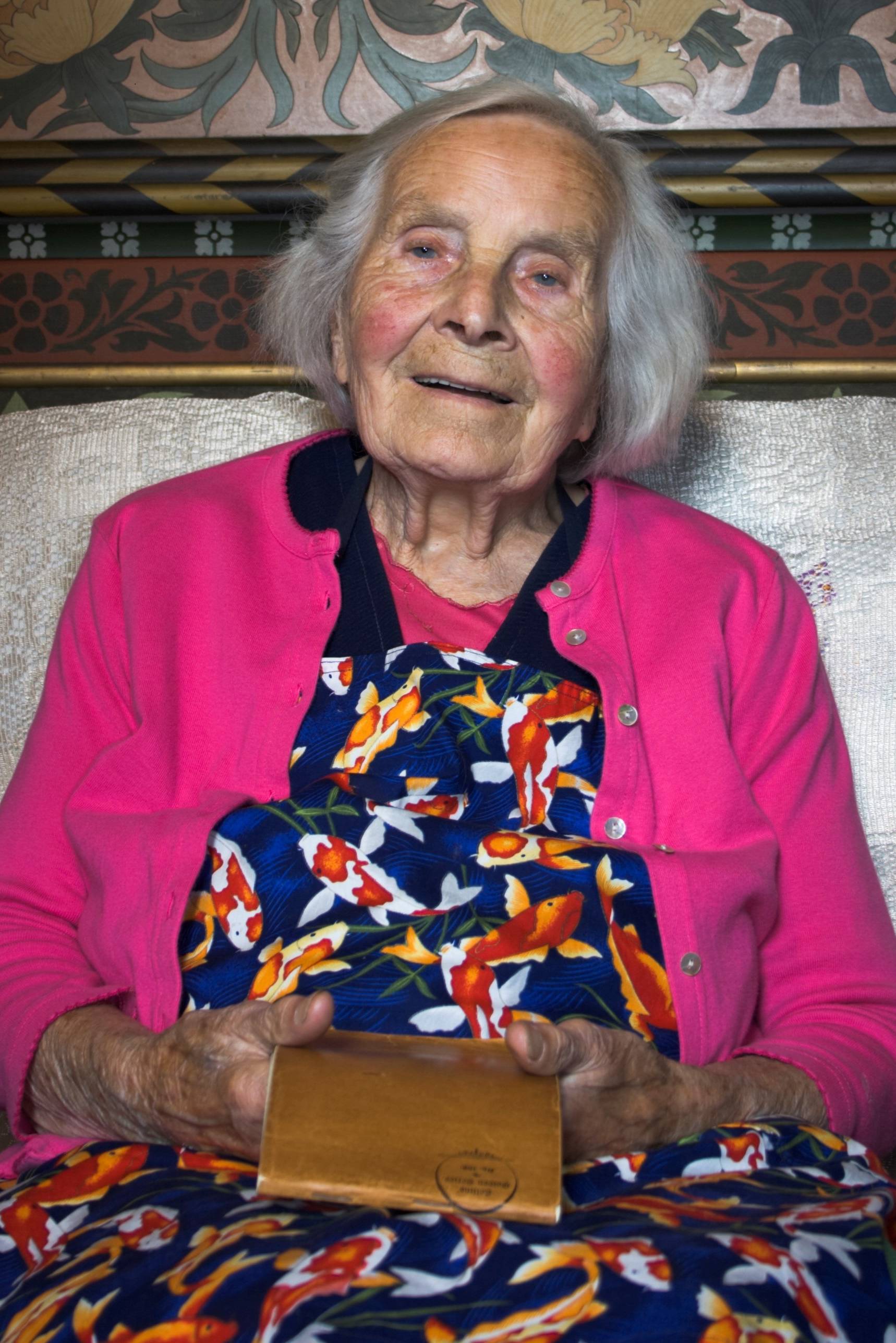 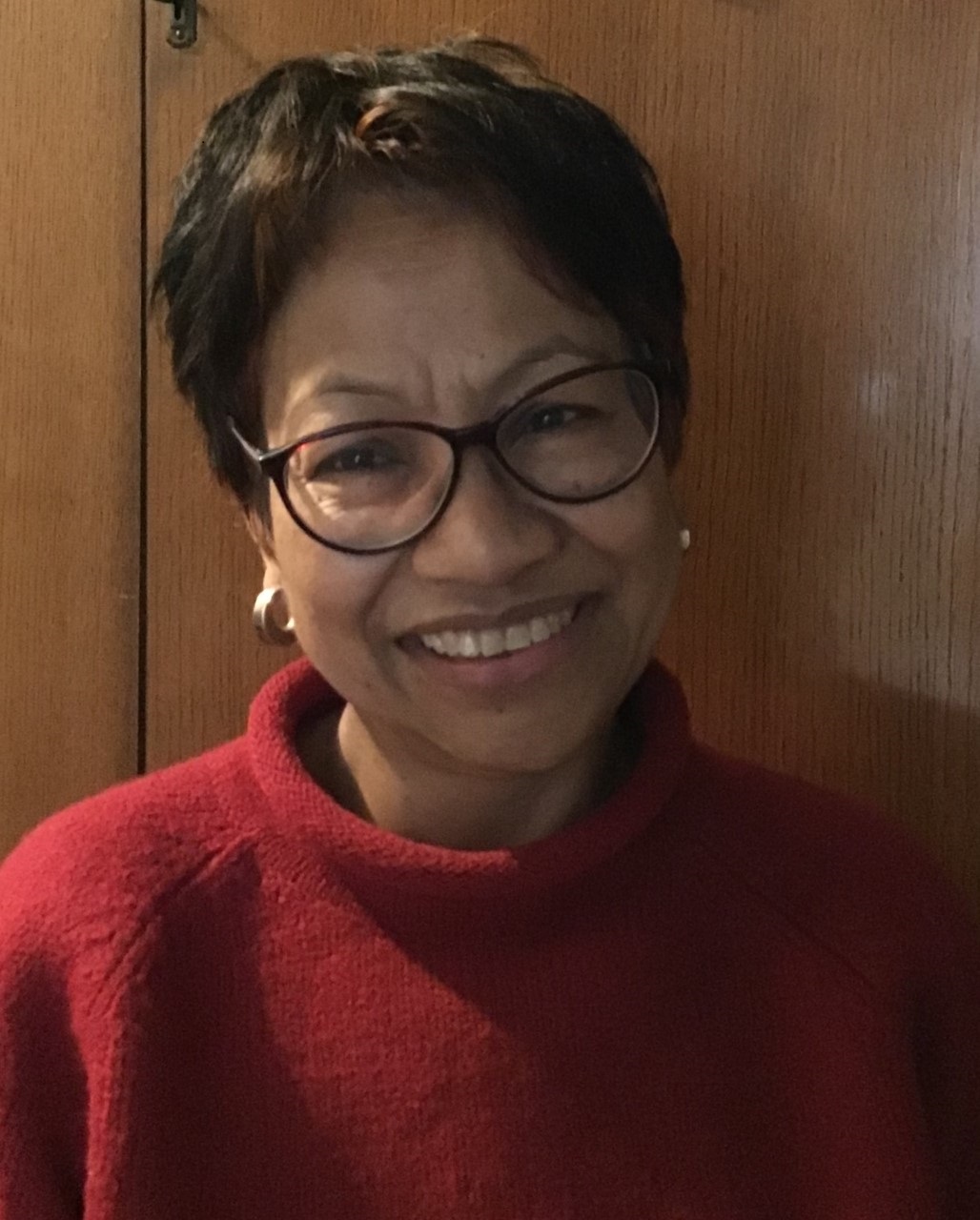 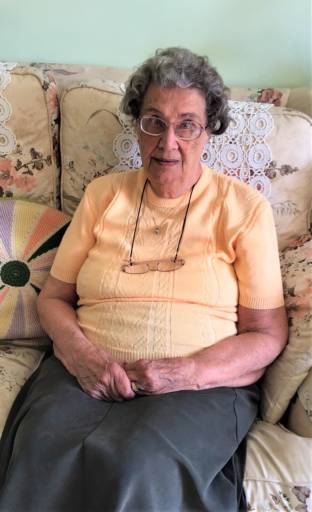 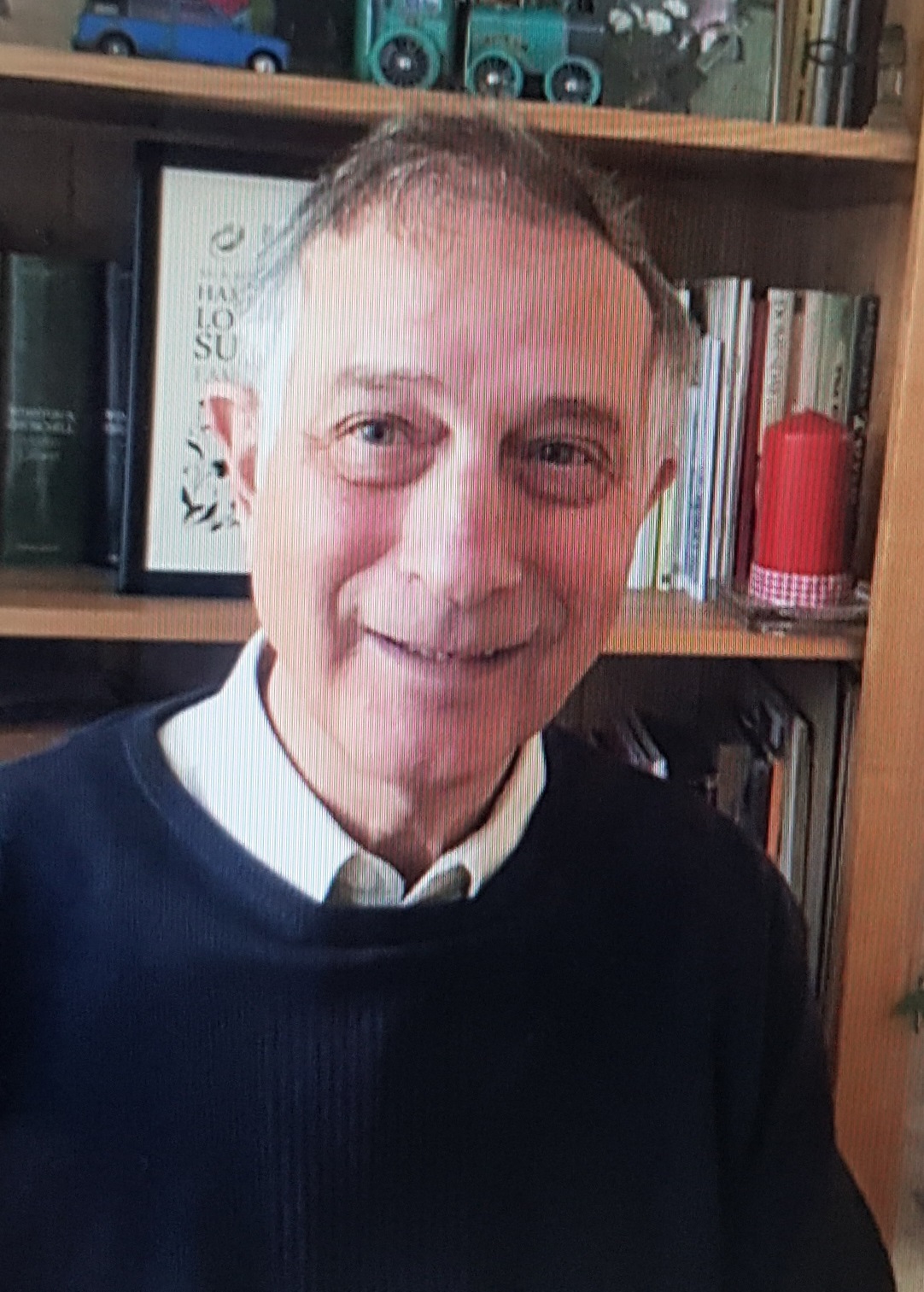 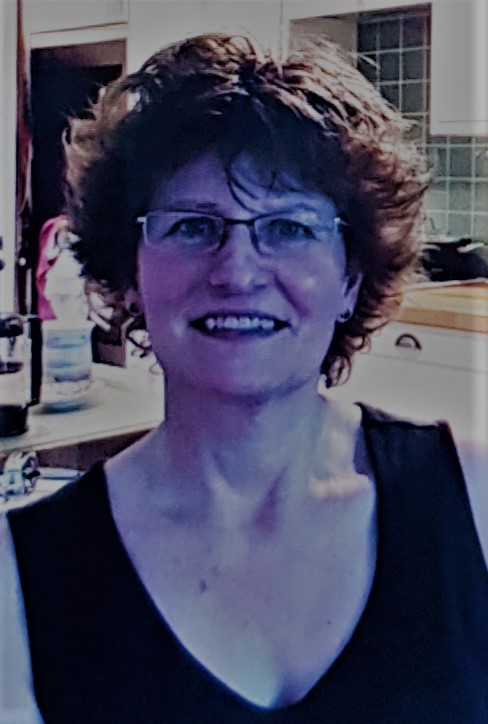 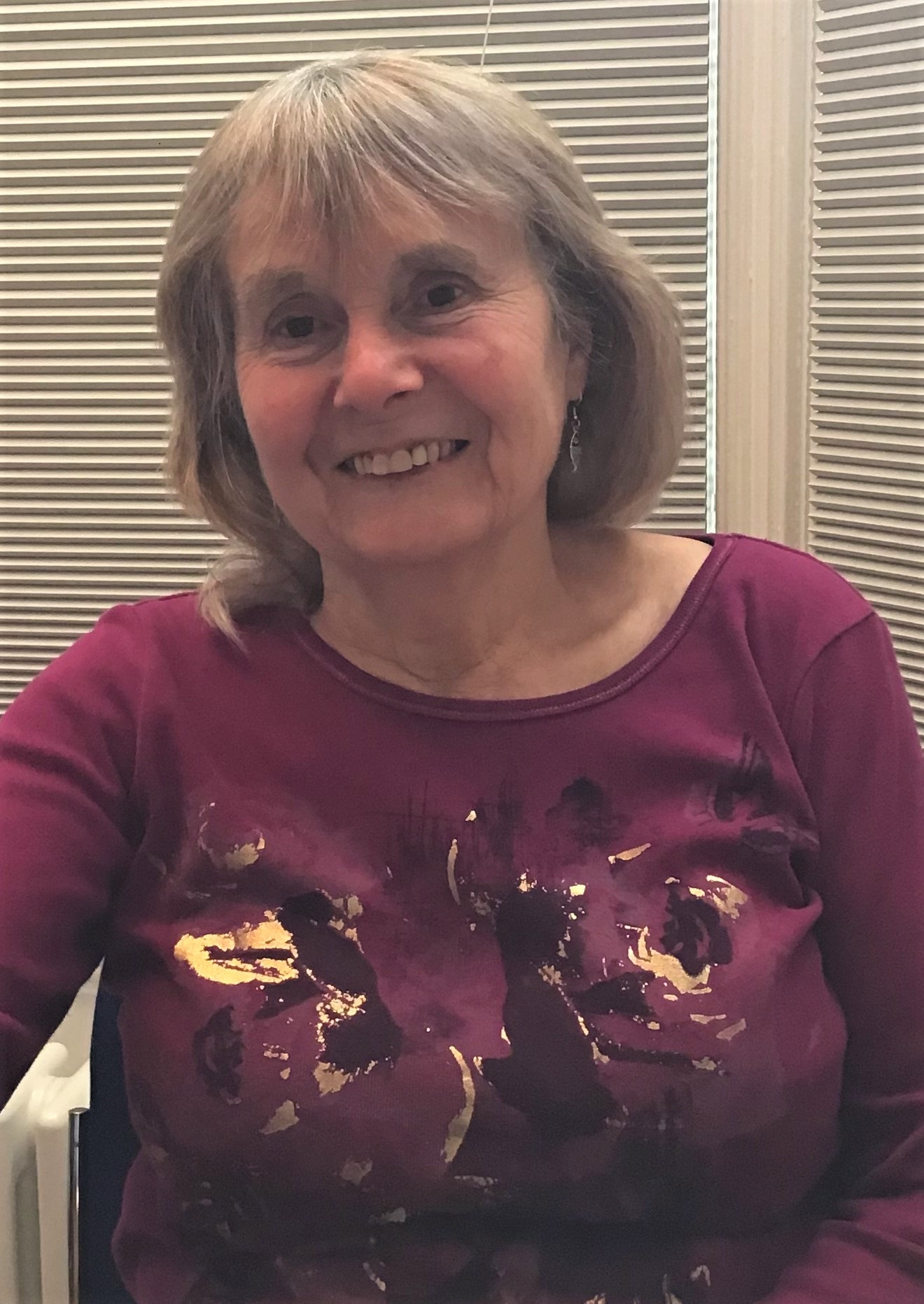 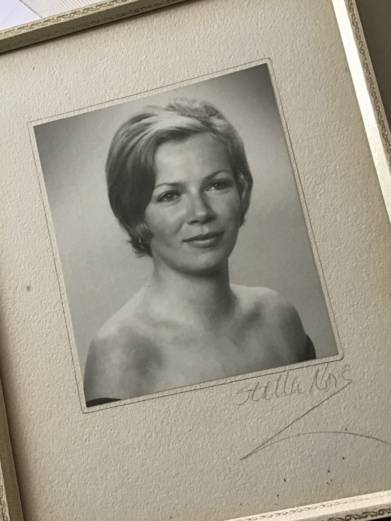 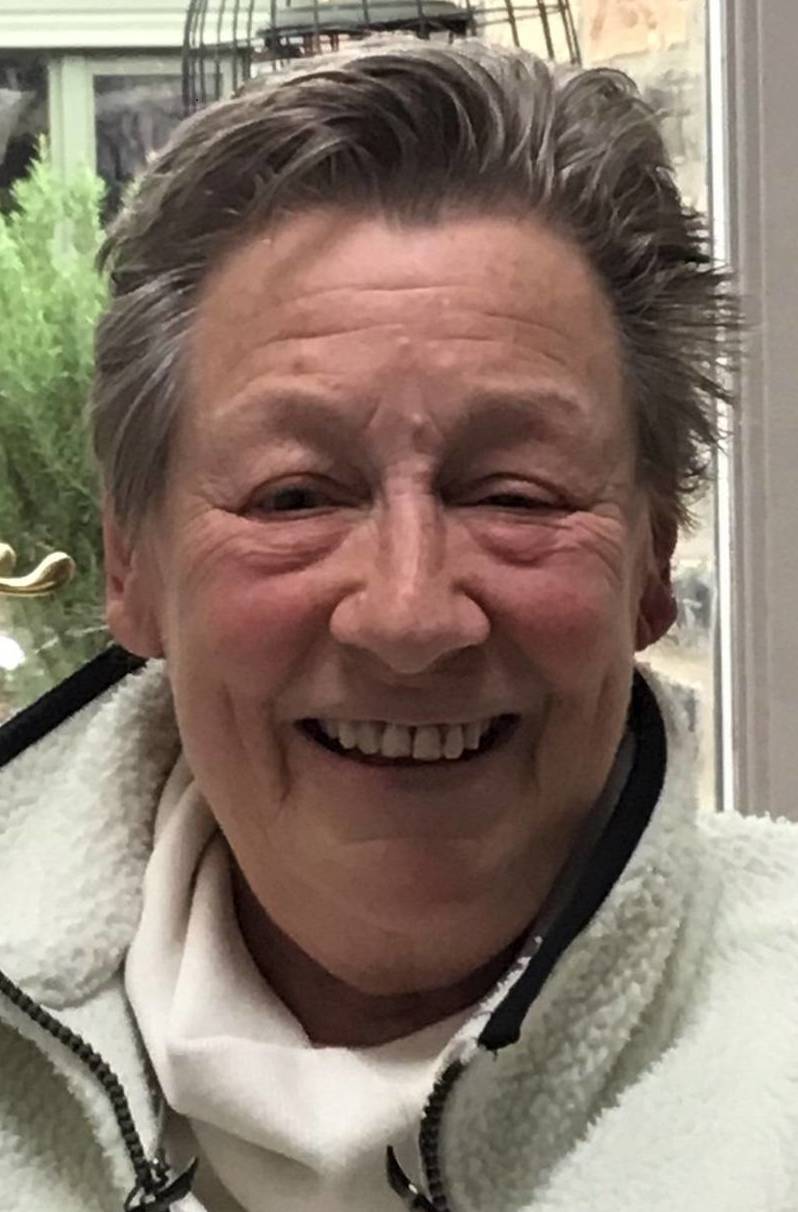 Sounds of the House 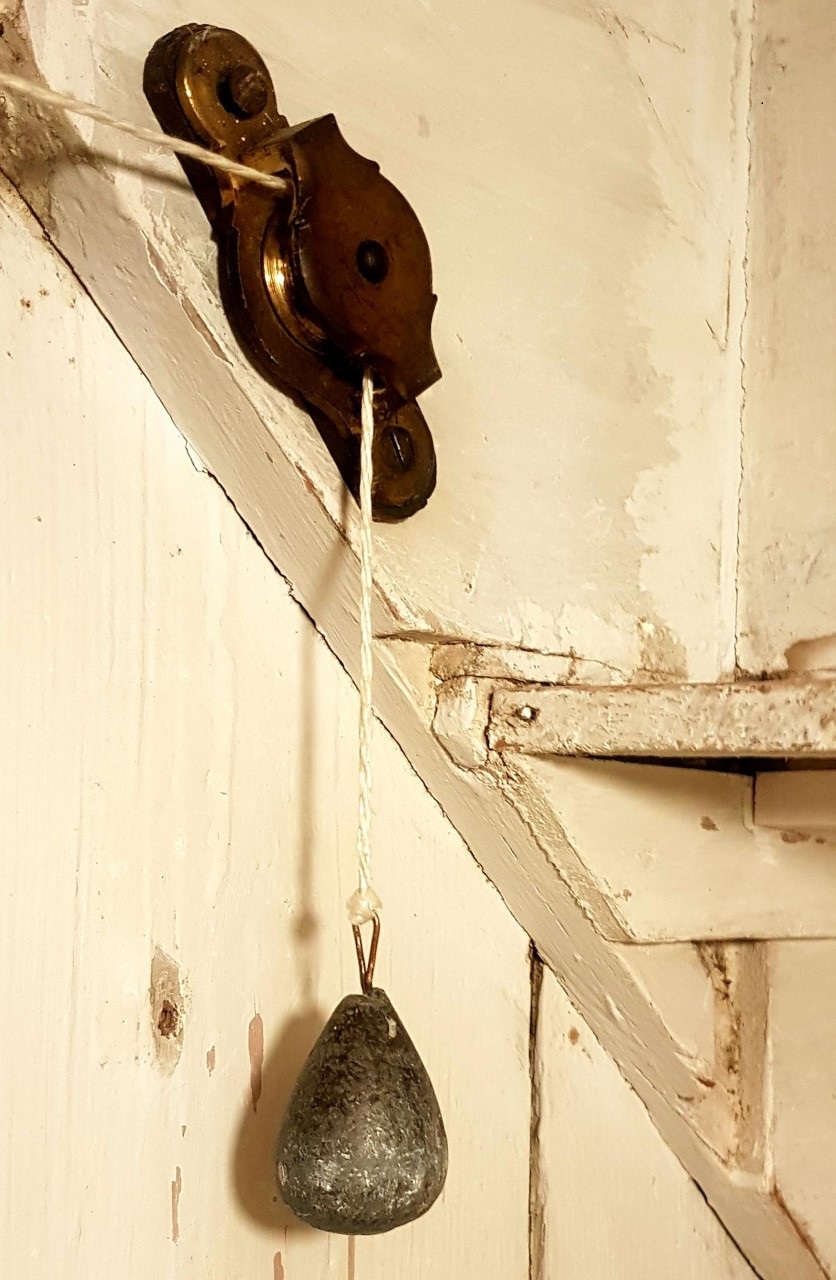 “Mr Leach is a man who has a great deal of taste and people send all over England for him to do their houses…” Maud Darwin, 1885

Frederick Richard Leach (1837-1904) was a master decorator and painter. He established his firm of artworkmen at his home and workshops on City Road in Cambridge in 1862. He went on to work with many of the master architects, artists and craftsmen of the day, including George Frederick Bodley, William Morris and Charles Eamer Kempe.

Leach specialised in all aspects of church decoration, from wall painting to altar-hangings, stained glass to candlesticks. His work is found in impressive Arts & Crafts and neo-Gothic buildings in Cambridge, including Jesus College, St Botolph’s church, Queens’ College and All Saints’ church as well as all over the country from Cumbria to the Isle of Wight. He also worked on a prestigious commission at St James’ Palace in London.

You can find out more about some of the buildings the F R Leach firm worked on by clicking on the marked places on the map below. You can also browse the full list of locations.

Alternatively, if you want to visit the beautiful buildings and art work that the firm worked on in Cambridge download our walking tour and enjoy an amble. Find out more about the Leach walking tour.

Until the Victorian era, the area around the David Parr House area was primarily countryside. This changed with the coming of the railway in 1845, when the land between Parker’s Piece and the railway line became ripe for development. Soon Cambridge burst out from its medieval boundaries, offering much needed land to its growing population.

Houses, churches, shops, hospitals, schools, pubs, workhouses and cemeteries sprang up. Our local area was known as a diverse neighbourhood from the very beginning: a rich mix of university, middle and working-class streets and housing. This mixing only went so far however. Then, as now, there was always some kind of marker between one group and another, be it through a dividing road or the design of a house. Artisans’ houses were distinguished by their front gardens and doors as well as their entrance hallways; railway workers’ terraces instead opened straight out into the front room. David Parr moved into one such artisan’s home on Gwydir Street in 1887. For many people, these houses were more than just homes – they carried out their business within them. Lots of the houses had workspaces known as ‘shops’ (a short form of ‘workshops’) at the bottom of their gardens where artisans would work their trades: carpenters, milliners, shoe makers, tailors, printers, dressmakers, and of course painters.

The area has changed a great deal since then. Cafés have taken the place of breweries and vintage shops have replaced cinemas, however in one way our neighbourhood remains the same – it is still a diverse and vibrant area of Cambridge.

We do hope that you enjoy exploring the area on your visit to the David Parr House and that you discover some of the gems it has to offer.

You can find out more about the rich history of Mill Road on the Capturing Cambridge website: a wonderful community project and documentation of this part of Cambridge.

You can also find out more about the lives of the people who used to live and work around Mill Road by taking a walk through the Mill Road Cemetery, or browsing its website.

David Parr often worked away from home on various commissions with F R Leach & Sons. However, there was a lot going on at home to keep the artisans busy: architectural Cambridge underwent much change in the Victorian era. Due in no small part to the work of the Cambridge Camden Society and the Cambridge Architectural Society, the city soon became home to some of the key movements of the day, particularly the neo-Gothic, and many of Cambridge’s churches, colleges and homes were transformed.

Ruskin, Scott, Morris, Bodley and Kempe all left their mark. Ruskin opened the Cambridge School of Art in 1858 (now part of Anglia Ruskin University). Morris was commissioned by Jesus and Queens’ College to decorate their chapels, the latter in partnership with Bodley who also built and decorated one of the great Victorian churches of the city – All Saints’ on Jesus Lane. He in turn asked his friend Kempe to create some of the stained-glass windows within All Saints’.

Frederick Leach carried out much impressive work commissioned by these big names, but he also was capable of designing his own schemes. The highlight of Leach’s work is the mural on the wall of St Clement’s Church where saints surround the figure of Christ.

If you’d like to see some of these neo-Gothic buildings for yourself download our Cambridge Tour which features many of the buildings that F R Leach worked on. On the tour you will hopefully appreciate Bodley’s belief that ‘Little and infrequent touches of beauty … will give a building a tender grace, and it will be a delight to all passers-by.’

After setting up the charity in 2014 the first urgent job was to fix the roof.

When it rained the water came through the ceiling. The deterioration of the interior, if left untreated, would be rapid so it was decided this repair could not wait and the charity re-roofed as soon as the funds were found through a private donation.

Once this immediate work was completed we put all our energy into raising the money to conserve the rest of the house and in 2016 the David Parr House was successful in being awarded a grant from the Heritage Lottery Fund to allow us to undertake a two and a half year conservation project.

You can read the full story of the Conservation project here.