Days
Wednesdays, Saturdays and Sundays
Cost
£5 (£6.50 with donation) per person 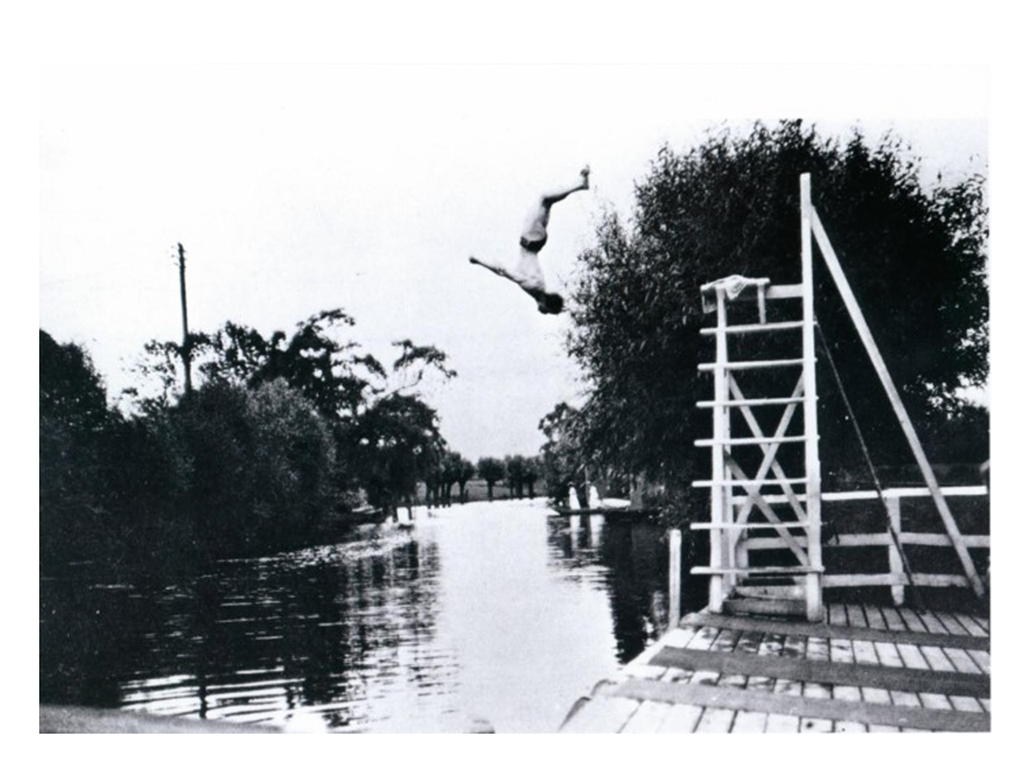 The Cam – A River for the Town with Tamsin Wimhurst

Ric Leach is the great grandson of Frederick Richard Leach. He inherited the skill of craftsmanship from his great grandfather, becoming a cabinet maker, but he is also a wordsmith. Here he writes about some of his memories as a Leach family member.

Ric Leach brought a smile to our faces when he sent over these poems that he has penned during lockdown – enjoy and we hope they bring a smile to you too.

I’m 77 today
Legs gone wobbly
Knees gone weak
Lots of other things
Of which I dare not speak
Pills for this and pills for that
And then the diet, I mustn’t get fat
But that’s all Ok
I’m 77 today

My lunch club friends
Say that’s nothing big
Compared to us, 77!
Your just a kid
So I’ll stop complaining
I’ve had my say
After all I’m only
SEVENTY SEVERN TODAY

Tuesdays are a happy event,
To some they are heaven sent
A time to smile and say hello
To share a care or tale of woe.
That’s the message that it sends
To be among my lunch club friends.

New hellos and last goodbyes.
Laughter tears and some sighs.
Love and sympathy, that’s the trend,
From my dear old lunch club friends.

It works as by magic,
but there’s none that I can see.
Tea and biscuits and sparkling repartee.
The very essence of life without which
The road would never bend.
You ask me where’s the magic,
I reply, its being with my lunch club friends.

When things go wrong,
And there’s trouble without end,
I can always rely that my troubles
Will melt away when I take council
from my kind and gentle lunch club friends.

When I tell tale or joke
The tone of which has started to descend.
Some will say I don’t know where he gets it from.
Another says, I do, he gets it from his
His lunch club friends.

(Insert the name of your club or group, that you are missing at this time, into the poem and raise a glass to the all)

Justly proud was I, my windows clean and bright,
My they were a cherry sight. I bragged my system with
Secret potion, they did stir such emotion.

But then the fiery orb came round, streaks and smears they do abound.
My pride deflated, jeers and and mirth all round, the secret of sparkly windows
had not been found.

Then, with whirling squeegee and tissues plenty
and elbow grease, not gently and in a trice
‘Pon  my word they did look nice.

Sparkly windows have I now. I can only exclaim, there  the best.
She can come and do the rest.
DAD

A Boy and his Dog

Every boy should have a dog; a dog can impart so many qualities to a growing boy, loyalty, trust, companionship, unconditional love and respect, patience and courage.

My dog, Bob, came from my aunt’s dog, Judy. He was named after the hero dog in “The BEANO” comic, Black Bob. I made my choice from the litter, I picked him out straight away, white socks with two white spots for eyebrows and a white cross on his chest, and it was love at first sight. I took him home but I didn’t realize he wasn’t ready to leave his mother yet and I had to wait for what seemed like an eternity.

However, eventually I did get him back and it was the start of a long friendship that would last until my teenage years.

We were inseparable, see me, see my dog, no need for a lead, he was so obedient. In those long hot summers of childhood he was always with me and my pals, sharing our adventures, making dams and bridges, tearing through the woods, drying our shoes and socks out when we got a “booty” We never went for formal “walkies” we just went out, never the less any sort of walk always started with a lot of barking, jumping up and biting my shoes until I had to say “that’s enough” only then would he behave. Each day we would emerge from the fields and woods and come home from our adventures, ragged, tired, muddied and sometimes bloodied, wet shoes and socks, the worst thing would be torn clothing, we’d get a right telling off for that. Most of all we were hungry, even Bob was hungry. Bob was becoming a fine looking dog now his bit of string tail had filled out he was Border Collie with a dash of Spaniel about him.

The whole scenario was Huckleberry Finn meets Just William. One last excitement for the day was the radio programme “Dick Barton, Special agent” We would ask a passing stranger the time “a quarter to seven” he’d say and we would be off, we would regroup after the broadcast and discuss the likely outcome, it would probably provide a plot for tomorrow’s adventure. My mother never knew where we were, when questioned wasn’t she worried?

She would answer they’ll be home when they’re hungry. That’s how it was in those days

Although Bob and I were always together there were moments when we were not. School for instance, while I was at school Bob had his “rounds” this consisted of going round to the neighbours to see if any tit bits had been left out for him, they all knew him, Ric’s dog Bob.

Sometimes he would resort to unashamed cadging I caught him at it once, he was in Mrs Makepeace’s garden sitting at attention his every nerve was focussed on her back door willing it to open, maybe Mrs M was a creature of habit and this was the moment. I called him, no reaction, I called again, he gave me the briefest annoyed glances, and they say that dogs can’t talk………….. I didn’t call again.

One day I was in school when someone opened the classroom door, in trotted Bob tail wagging furiously as he saw me, “Is that your dog” the teacher asked, I nodded “then take him home” the teacher not amused, obviously not a dog person. I didn’t scold Bob, in fact I was rather proud of his tracking skill and how he had avoided detection, and I had the bonus of time off school.

I was off out somewhere when I was aware of being followed, I looked behind me and there he was, he knew he was in the wrong but his eyes said “can I come” I had to be firm, “go home, go on, go home” he turned walked a few steps turned again, again those eyes, hoping I’d change my mind “go Home” I’d walk on not daring to look back, we had played this scene before, I knew that he wouldn’t move until I was completely out of sight. On another occasion I went to the pictures with one of my schoolmates, probably a western or some swashbuckling adventure, when my mate whispered ,”does your dog go to the pictures” no I replied, my mate giggled “well he does  now” yes he’d followed me into the cinema, I let him stay, why not?

Bob used to wait for me to come home from school, patiently waiting at the front gate, ears pricked, eyes focussed on the direction I would come from, all the neighbours knew, if anyone asked about, that dog, “Oh he’s waiting for Ric” Even when I lost an eye in an accident and spent many weeks in hospital and convalescence he waited. He waited through my early industrial working life. Now he was getting old, he couldn’t see me until I was almost upon him. The tail didn’t wag with the same vigour, no more barking and jumping, just a slow wag of the tail he’d turn and follow me indoors. Bob lived until I was seventeen or so, a good friend and companion until the end, for the first time in my life I knew loss and grief. I have some photographs and a lot of happy memories to remember him by; perhaps this little essay will cement those memories of A BOY AND HIS DOG. 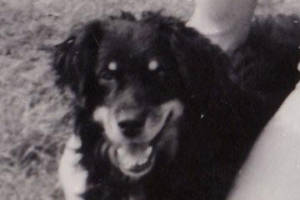 There’s always a story, in the photograph I’m wearing a wool zipped cardigan. 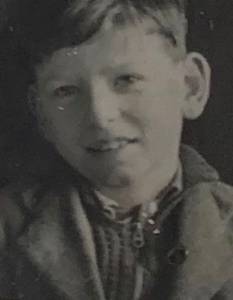 When I grew out of it it was unraveled And re-knitted into a dressing gown. When I grew out of this once again it was re-knitted into the cardigan you now see. when I grew out of this, somethings never die, it became a pullover (Tank top) when I ……………etc it became a swimming costume. Which leads to my first swimming lesson, my dad took me to the outdoor swimming pool with some contraption, one of those box of tricks, that consisted of a pole, rope and harness, everyone’s dad embarrassed them at sometime but this was the limit. The rest I’ll leave to your imagination, not forgetting the woolly swimming costume.

The woods and fields that I used to play in are still there.

The same trees and trails, mostly untouched, the WW2 firing range still stands, now overgrown with trees and bramble, it stands like an Aztec temple, inaccessible to even the most intrepid rambler, but it has been given the “country park” treatment, the riverside trails have been tidied, bridges have been built, car parking, signs and notices with all kinds of restrictions, the fly tipper with his treasure of camp building materials has been banned. It is not a wild place any more. It has been sanitized; health and safety have given the ok with all kinds of restrictions until you can hardly move. No kids play there now because of some perceived dangers. No kids climb the ruins of the firing range, digging up spent bullets, health and safety would go ballistic, pardon the pun reader. No kids make stepping stones from old milk crates to cross the river, or build dams to form pools. No kids come home with jars of sticklebacks, frogspawn or newts. No kids with stung and bruised legs pushing their way through to a secret camp, screaming with the sheer joy of childhood. All we needed was a sheath knife some string or rope and some matches, plus a lively and creative imagination.

Perhaps when all is quiet you can hear those post war kids with their stung and bruised legs, soggy feet and perhaps a dog to complete this carefree and happy band. 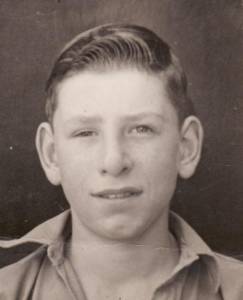